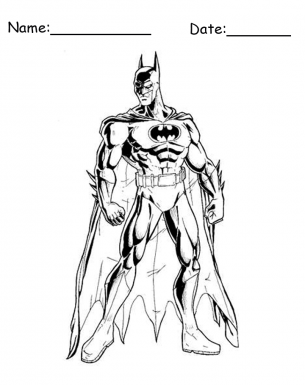 Parents, are you looking for activities to keep your little one quiet during long car trips or while you wait for appointments?

You’re not alone. Many parents have had to suffer the incessant question of, “Are we there yet?” from squirmy, eager kids.

You don’t have to become frazzled and impatient, though, if you provide fun activities for them to complete while you wait or drive.

Our free printable coloring pages come in all sorts of categories for many different ages.

These sheets are much more convenient than dragging a coloring book along on trips.

Coloring books often have pages that your child won’t even like, like those activity pages that are much too difficult for young children.

Here, your child will have all of her favorites anytime she wants them!

Do you have a Batman fan in your home? Batman has been popular for quite some time, but especially so during the last several years thanks to a number of blockbuster movies.

What’s not to like? Although a super hero, he doesn’t have superpowers. Instead, he uses science, technology and smarts (and quite a bit of money) to save the world from evil.

He’s much more identifiable for many people, though, because of his lack of superpowers. Kids – both boys and girls – love Batman.

We have a number of free batman coloring pages for children. You can print them off right at home, so your child will never be without his or her favorite hero.

Kids will love coloring in this action-packed Batman scene! The Dark Knight is shown soaring through the sky, cape flapping in the wind.

His powerful bat logo is emblazoned on his chest, and he’s armed with his trusty Batarang. This page is perfect for any young fan of Batman.

Batman is one of the most popular superheroes of all time. He first appeared in comics in 1939, and has been a fixture in pop culture ever since.

Batman is known for his dark personality, brooding demeanor, and fighting crime in Gotham City.

Your little ones will have a blast coloring in this action-packed Batman scene!

There are pictures of batman standing, flying over buildings, surrounded by bats, and generally looking like the tough good guy he is.

This Batman coloring page is one of the most popular downloads in our coloring pages section because it shows Batman at his best.

He looks strong, tough and ready to fight crime in Gotham city.

You wouldn’t want to take this guy on! Just for fun, we thought we’d share some of our favorite Batman quotes from the movies.

You either die a hero or you live long enough to see yourself become the villain.

Some men aren’t looking for anything logical like money. They can’t be bought, bullied, reasoned or negotiated with. Some men just want to watch the world burn.

It’s not who we are underneath, but what we do that defines us.

Why do we fall? So we can learn to pick ourselves back up.

A hero can be anyone; even a man doing something as simple and reassuring as putting a coat around a young boy’s shoulders to let him know the world hasn’t ended.